Childbirth – The Musical or Comedy? | Luke and Susie 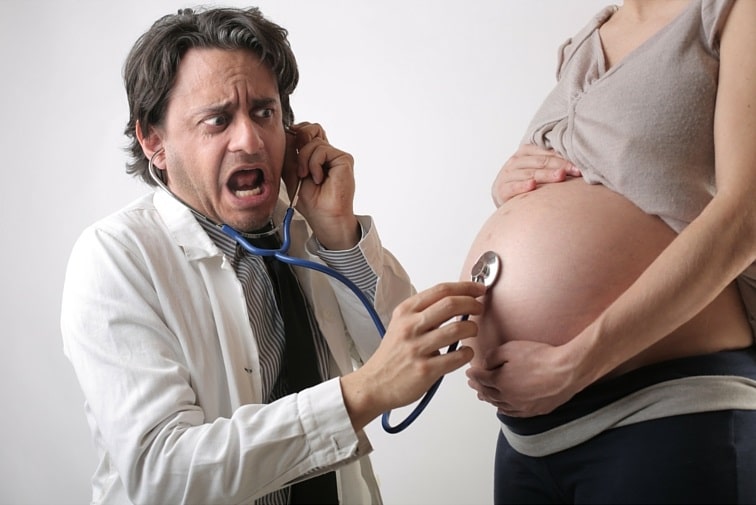 It was an interesting day going in to the hospital knowing that the next day I would have a baby.  After weeks of having blood results analysed, it was decided that the safest thing was to induce the birth right on 40 weeks rather the birth to be overdue.

In the morning I had the most remarkably peaceful walk.  It was a gorgeous day with blue sky and a cool breeze and I recall a flock of cockatoos flying overhead as I walked singing the hymn “How Great Thou Art” quietly to myself.

A few hours later my mum, husband and I arrived at the hospital to begin the process toward induction which was to happen the next morning.  The only problem was that the hospital was so full that there were no beds available on the wards.  So I spent the night before Tyson was born in the very full Emergency Ward.  Strangely, this was actually perfect because it was a private room that allowed me to begin labour by myself without any eyes on me as Luke and Mum had gone home to sleep before the big day.

Here’s the thing… Many other women were birthing throughout the time in the lead up to and during Tyson’s birth both in the Emergency Ward and then in the Birthing Suites.  If you’ve never been in a Maternity hospital’s emergency ward with labouring women or a birthing suite before, then hear this… it is a truly musical experience.

While in the Emergency Ward there were two women labouring… loudly…. Very loudly.  In fact, so loudly that I’m pretty sure they kept waking my yet-to-be born child.  Though never finding a harmony, there were times when their melodic tones were simultaneous ranging from a seemingly masculine bass line to what is most likened to the high pitched squealing of a curly-tailed piglet.

As someone who was yet to go through the whole experience, this didn’t exactly comfort me!!!  Despite their rather off-putting vocalizations, for them they gave way to healthy births.

In arrival in the delivery suites a few hours later, I was again regaled by the tunes of a birthing mother.  By this stage I’m starting to think that this is what I’m meant to do and begin frantically trying to recall the vocal warm-up exercises I was taught in singing classes.  Under the pressure of being in active labour, all I can remember is the one learnt in high school… “Laughter is contagious and it’s advantageous, ha ha ha ha ha ha ha ha ha ha ha ha ha”.  Since I couldn’t find the key to sing it in that matched the tunes of my counterpart in the other room, I felt it best not to sing it.

The issue I was more concerned about in the birthing suites was my husband deciding it was time to pull out his best comedy gear.  I’d had words with him weeks before Tyson was due just to make sure that he was clear that I wanted him to not make any jokes during the active part of labour.  None whatsoever.  Not one.  Not even a hint of one.  Not even imply one.  And definitely not to have a joke on the side with my mother or midwife.  This greatly troubled him to the point where I heard about little else right up to the time Tyson was due.

Little did I know that once the labour became active, I would decide that rather than having a peaceful quiet room, I would become the comedienne.  Oh yes.  It was me making the jokes, putting Luke in the rather precarious position of wanting to respond to my incredible funniness with his own, but knowing that it was treacherous ground.  This gave me a captive audience with no comedic competition from my husband.

Neither I, nor he, could have known that my life’s best one-liners would make their appearance in between contractions and calls of “PUSH” from my mid-wife.

I’d love to share these incredibly funny jokes with you… but I can’t really remember them.  I do recall asking the mid-wife’s assistant to give me her bottom because mine was hurting too much.  Apart from that, I’m blank.  But it was funny… oh you can be sure… I was very funny!

On the whole though, Tyson’s birth was a very peaceful process.  For the most part, I just breathed my way through things with the occasional yelp of pain and frequent side-splittingly hilarious punchlines.  I’m so thankful to have had the opportunity to go through it when for so many years we weren’t sure that it would ever happen for us.

Whether it be a musical or a comedy, I learnt that day that childbirth is a truly remarkable and unique experience.  But, next time I’ll go armed with more vocal warm-ups and a recorder to catch the jokes!