We have the privilege of speaking with pro surfer, Bethany Hamilton who is currently in Australia to promote her latest film, ‘Unstoppable’ and compete in the World qualifying series. We’ll also cover the important topics, like what it’s like to be in Australia right in the middle of the “great toilet paper shortage”… 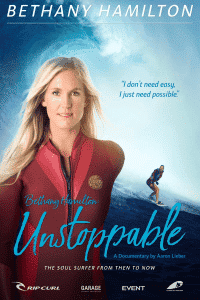 The movie, Unstoppable is about determination and Bethany’s story, who at age 13 was out surfing when she was attacked by a 15-foot tiger shark, a run-in that cost Hamilton her left arm. Not only did she survive the attack, she was back on the competitive surfing circuit less than a year later!

Now more than a decade later, Bethany is now a mother, and is undertaking her greatest challenge: chasing a toddler and the biggest wave of her career.

BETHANY HAMILTON: UNSTOPPABLE is the untold story of the heart of a champion and her resilience against all odds to become one of the leading professional surfers of our time. Bethany Hamilton is continuously rewriting the rules on being a fearless athlete, and brings new meaning to the phrase “surfs like a girl.”