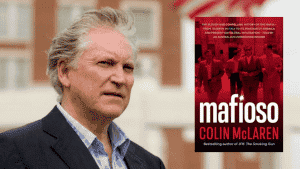 COLIN McLAREN was one of Australia’s finest detectives. He travelled the world on high-end investigations during the 1980s and 1990s. He faced down the underbelly of Australian crime and his work has been the subject of many police genre documentaries and television series. A film of his own life, based on his hugely successful first book Infiltration, the true story of his efforts as an undercover cop, was made in 2011.

He talks to Luke about his latest book: the compelling and definitive history of the Mafia, and as an ex-undercover cop with personal experience of the Mafia’s ongoing hold on criminal activity worldwide. Mafioso also details the scourge of Mafia in Australia, as McLaren finds himself in the centre of it all, undercover, trying to solve a 1990s rampage of crime.

Find out more at: https://www.hachette.com.au/colin-mclaren/