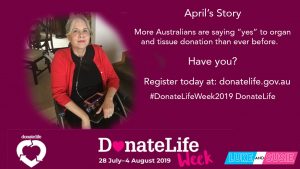 On this podcast, we are catching up with a truely remarkable lady, April. She fell ill six years ago with a bad flu and a cough that refused to go away. She was eventually diagnosed with an auto-immune disease which affected her lungs and was eventually listed for transplant surgery. While waiting for her lifesaving gift she became so incapacitated that she was only able to be with her daughter, Chloe for a very limited time each day.  Her gift of lungs reunited her with Chloe and gave her a deep compassion for others who are waiting for transplant.

It was their faith in God that helped them through such a helpless time, when it looked like April wasn’t going to make it, they simply gave it to God. Check out the podcast for more of April’s encouraging  story!

As of 12th April there are 116 Australians waiting for new lungs, and 1551 on the combined list waiting for a kidney, liver, heart, lung or pancreas.

For more details, or to donate, head to: https://donatelife.gov.au/