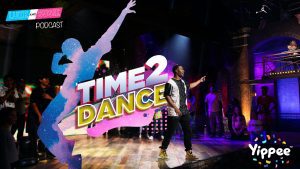 This week we are joined by Keith-Alan, also knows as ‘the motivation guy’! That says it all, Keith-alan’s charm, positive energy, and charisma have connected with kids for almost a decade. He has an ability to inspire people to step outside their comfort zones and believe in themselves. He wears many hats from Tv show host, a dance teacher, an influencer and a pastor.

He opened up a kid’s dance studio with his wife in Los Angeles called “Time 2 Dance” that has existed for 7 years. In addition to teaching dance, Keith-alan is also one of the top hosts for children and family entertainment, hosting a new show on Yippee called Time2Dance. Time2Dance pulls kids from their live audience who have no formal dance experience to prove that anyone can dance.  Part competition show and part dance battle, contestants are mentored and encouraged!

Currently, he’s also working for a popular gaming Youtube channel called Proguides Fortnite, where he is seen and heard by hundreds of thousands of people every week. On top of all that Keith-alan’s greatest passion is pastoring a church with his wife Maral Hinson. He is driven to make an impact wherever he goes, no matter the stage or platform.

You can watch Time2Dance on the new family safe platform Yippee: https://watch.yippee.tv/browse.