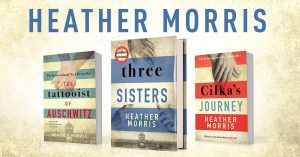 In 2003, Heather was introduced to an elderly gentleman “who might just have a story worth telling”. The day she met Lale Sokolov changed her life, as their friendship grew and he embarked on a journey of self scrutiny, entrusting the inner most details of his life during the Holocaust. She originally wrote Lale’s story as a screenplay – which ranked high in international competitions – before reshaping it into a debut novel, The Tattooist of Auschwitz.

When they are little girls, Cibi, Magda and Livia make a promise to their father – that they will stay together, no matter what. Years later, at just 15, Livia is ordered to Auschwitz by the Nazis. Cibi, only 19 herself, remembers their promise and follows Livia, determined to protect her sister, or die with her. Together, they fight to survive through unimaginable cruelty and hardship.