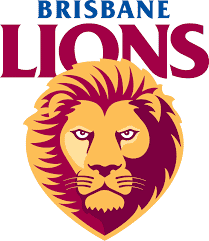 Another week, another new adventure and this week it was to attend a Melbourne event… The Brisbane Lions Family Day!

It was a funny week for the challenge, actually.  Monday, Tyson showed signs of having a cold, which hung around for the whole week, leaving me predominantly housebound.  Fortunately, come Saturday morning, Tyson seemed quite a bit better and we were able to head out as a family to join the merry throng of Brisbane Lions fans.

The ground at Bulleen was absolutely jam-packed with cars, but we were able to successfully car-stalk some young guys to gain ourselves a park close to the action.

There was no question that this was a Brisbane Lions crowd.  Lions paraphernalia was everywhere and on nearly everyone.  There was a petting zoo (with no lions… go figure!), a couple of rides and games and marquees setup around the perimeter.  It all looked good, except one thing was missing.  Not a single Brisbane Lions player in sight.

The coach, Michael Voss, was there though, on stage geeing up the crowd with his inspirational words demonstrating confidence in this team as a premiership squad.  Ahhh… the pride of all fans listening to him.

As he walked off stage, Luke queued up, Tyson in one arm and a Lions bear in the other, for an autograph.  As he stood in line waiting, I noticed the arrival of the players’ bus.  What a moment.  Strangely, though not a huge footy fan, I found myself feeling emotional that they were here.

Now, this is where it got really exciting for me.  I was about to learn a very important lesson in anticipation.  The players were all on stage shortly after arrival, one by one receiving their guernsey.  Luke, Tyson and I stood in the crowd, but I was feeling a bit like we were in the way of others with the stroller.  So, I suggested to Luke that we move and stand by one of the marquees so we were out of the way.

Well, as the ceremony finished, the players were dispersed to different points around the ground.  Sure enough, the marquee we had stood in front of was where Jonathan Brown, the captain, came to.  And we were the first to get an autograph and photo!!

So, now we are the proud owners of a Brisbane Lions stuffed bear autographed by the coach and captain.

As the day wore on, it was little chilly, and a little overcast, leaving a sense that, at any moment, we could turn from a fierce crowd of footy supporters, to a bunch of squealing children trying to escape the rain.

Nonetheless, we Holt’s hung in there, determined to meet a few other players.  Jarred Brennan, one of my favourites, was next to visit.  Such a lovely man, very tall!

We visited a couple of others around the ground and got some photos and autographs.  Unfortunately, I don’t know the players well enough to tell you who they were, but I can show you the poster with their autographs!

As we prepared to leave, I saw another player I liked.  Michael Rischitelli.  Don’t really know why I like him, but he caught my attention last year.  Maybe Luke had him in my dream team. tyson__rischitelli.jpg

There were a few people around him, so we stood back for a minute and, before we were able to get to him, someone engaged with us.  It was a lovely looking, slightly older lady who introduced herself as Michael’s Godmother.  Her request was that we get Michael to hold Tyson so she could get a photo to send off to his girlfriend.  Would we oblige?  Ummmm…. YES!!!  Of course!

Michael didn’t hesitate to hold Tyson and we were able to get a couple of photos of our own, but when offered to receive the photo taken by his Godmother, Luke couldn’t say no.

All in all, it was a really great experience.  It’s been many, many, many, many years since I’ve lined up to receive anyone’s autograph.  I’m not so bold at such things on my own.  Strangely, I’ll do it for my son, though.

So, that’s the Brisbane Lions Family Day.  This is one adventure that I’d be happy to make an annual family event.